SO BORIS is back to work.

Prayers have been answered, one might say.  (And as I’ve written quite openly before, I’m not politically a huge fan of Boris Johnson, but I am grateful and glad he has recovered from his brush with death just a few weeks ago).

But…many questions remain – if one cares to ask them. Sadly, it seems, very few here do.

As our country – the United Kingdom – remains in some of the most draconian measures of lockdown in history.

Meanwhile less than 400 people (much less) have died of Covid-19 in Northern Ireland. The vast majority of these were over 70 years of age and either in a care home or even hospice. Meanwhile despite knowing about this virus since January, (I myself saw all of this coming and bought some face masks then in preparation, so why not the Government?) – the British Government failed to prepare to protect these older people who deserve to be treated so much more honourably than they have been.

Tonight I’d like to report a few lockdown pandemic experiences I’ve personally had, and prod a few facts out towards you for thought provocation and the belief that further scrutiny is needed of laws which have taken away now so, so much freedom and arguably creating much more damage than the original problem itself.

And by the way, where exactly did the authorities come up with even the lower estimate of Northern Ireland Health Minister Robin Swan’s prediction just weeks ago would be 3,000 deaths in Northern Ireland? (15,000 in a worst case scenario we were told). Have you thought about that? I mean really thought about it?

“The surge” we were all told was coming (and which many of my medic friends told me themselves they lived in real major fear and dread of) never came. As a number of us prayed, prophesied and declared in rebuke of the death declarations over our land, I very much thank God. But the reality is, the so called experts and their modelling, was incredibly skewed – at best. And nor will the awful second wave we’re now being told “could come, ” come.

However, yes prayer is powerful, and yes social distancing and staying home in Northern Ireland have worked. But: something simply clearly does not add up.

Last Friday, figures came out from the Northern Ireland Statistics and Research Agency (NISRA) into the public domain freely available to all members of the Northern Ireland public to learn (should they choose to read small print and far from freely publicized facts), that so far this year, 30.3% of all registered deaths this year were classified as ‘respiratory’.

However, according to NISRA, the number and proportion of respiratory deaths is lower in the year to date than the 5 year average of 1,613 – which is 31.7%.

Did you catch that folks? DESPITE this deadly virus we have all been fear hyped-up into believing is the absolute greatest emergency and worst thing ever known to mankind, in Northern Ireland, the fact is, actual death figures related to respiratory issues is lower so far this year than in the last five years. Astounding. But the facts speak.

By Friday 17th April, according to the Government’s official breakdown of figures by local council area in Northern Ireland, 117 cases of covid-19 had been officially been recorded in Causeway Coast & Glens Council area. (Where I happen to live). By Monday 20th April, this official figure had actually gone down to 106, (obviously some kind of error in counting – er, that’s really reassuring…), and 6 deaths were recorded at that time for Causeway Coast & Glens Council area. By Tuesday 21st, these figures stayed the same, then by Wednesday 22nd April, these online public Government official figures stayed the same again.

However, that night, 22nd April, I noted that the website and figures has been taken down altogether, with the public no longer able to access the breakdown of exact covid figures per council area. At time of writing, this remains down, and exact figures remain unable to be accessed by the NI public. This should trouble any lover of openness, scrutiny and freedom. We are simply told, with zero suitable explanation, “figures for Northern Ireland have not been updated since 20 April”.  Again, very, very interesting.

This comes amidst the fact every single day this tight lockdown and these draconian measures continue, Northern Ireland is becoming more and more decimated with less and less of an economy to come back to. Fewer and fewer jobs will remain. More and more lives will be lost now to undetected cancers, suicides and domestic abuse. The “cure” is becoming much, much worse than the problem. Dont get me wrong, Im glad we did a lockdown perhaps for a few weeks. But where is the wisdom and justification for continuing to decimate an entire economy – for decades to come – because of the low figures God has mercifully allowed Northern Ireland to have relating to one particular disease (in this case virus). It simply doesn’t make logical sense.

So now that we have established that, let’s consider a tiny snippet of what else is going on currently under this week 6 of tight draconian lockdown:

This week we had a brave doctor coming out courageously, speaking out in one of the daily newspapers on what’s actually going on in some of the hospitals in Northern Ireland now.

You can read this article printed out below: 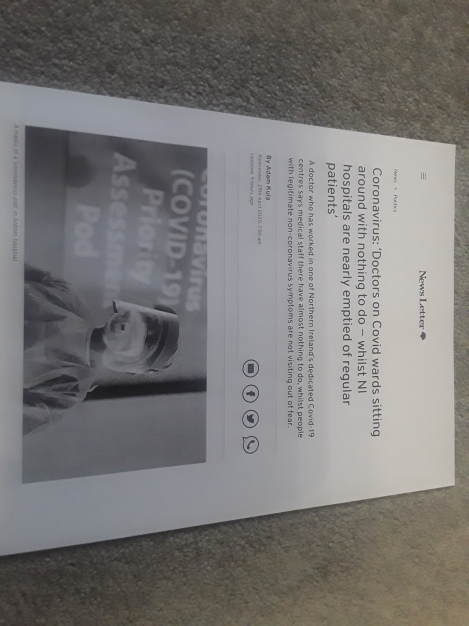 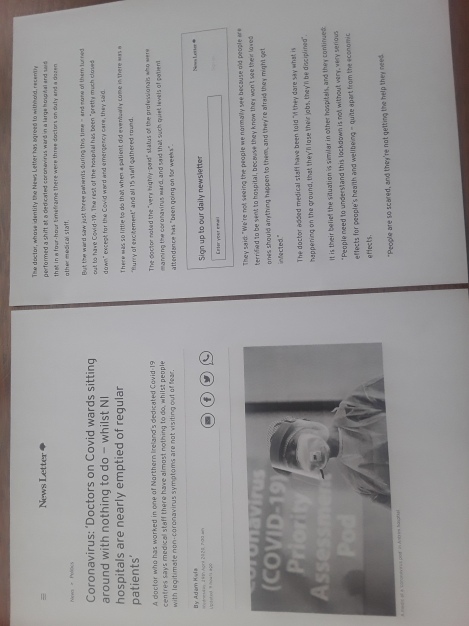 So now we continue on – I repeat – in economically catastrophic, cancer-fuelling, mental health-epidemic-fuelling, draconian lockdown measures which the WHO itself now questions and contradicts itself upon by doing its very recent U-turn on Sweden’s way of handling the virus – (it stands very alone in the world deciding to remain open and not lockdown, but is having much better results so far than many other European countries, unsurprisingly, including the UK).

All of this comes amidst remaining trapped in our houses. And we are told (again extremely controllingly) in the UK this may be in some form until a vaccine is found, especially so for those deemed to be in clinically vulnerable categories.

More on that one another night.

For now, suffice it to say, something is not adding up.

Last Friday night I went for a walk in the evening as I normally do, and ended by being intimidated right at the end by not one but six unmarked police cars (keep in mind I live in very rural County Antrim, and have never seen 6 police cars in my life like this), and 5 of them went up the lane to our neighbours, to then tell them off for loud music and a bit of a Friday evening party, whilst the other unmarked police car stayed on the road, watching me, trying to intimidate me, as I walked the last 200 metres or so back to my house and only once I reached the house did it proceed to follow the other 5 cars up to our neighbour’s house. Since when did we become a Communist-like country?

Yet as you will see from the photograph I later took from my house, (above) the police officer was far from sucessfully carrying out social distancing measures!  Again, make what you want of all this.

It might be ok in Nazi Germany, but I’ve yet to be convinced it’s what we should be accepting in a so called Western democracy.

After all, it’s still a free country. For now.

At least that’s what Boris would have us believe.