So I stepped out in faith at the beginning of the summer months and and then wrote the now infamous intentionally honest, vulnerable blog post I did. I have not looked back, and not been disappointed.

This photograph was taken earlier this afternoon, on a bank holiday stroll along the stunning beauty of White Park Bay, in the North Coast of Northern Ireland. Cows also roam freely here. It’s a curious sight to behold!

Often opposites co-exist together. Often beauty is to be found alongside ‘the beast’ – whatever that beast may be. And I have known much beauty – or many good things – as a result of ‘the beast’ of the crap I went through earlier this year – again. 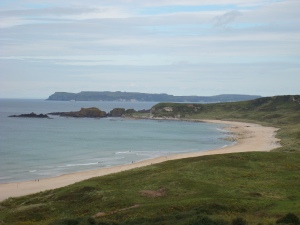 The past few months have continued not easily, but I have been phenomenally blessed with being offered houses of friends all over the UK, and as a result have ended up blown away by a few folks kindness and love in a practical way, and being led to intentionally pray and write around British corners as far flung as Newcastle/ Gateshead, London, Sussex, Southampton and I even made it on a short day trip to the Isle of Wight.

Life has most certainly not been dull.

Amidst ‘the beast’ of my past year’s unwanted adverse circumstances, and health playing up again, not allowing me to proceed as I had thought and hoped I might, it seems that in his guiding mercy and creative flair, God has once again decided to display himself through my life and leadings. Having felt prompted to share, be vulnerable somewhat, and let Him. I have been provided for in blessed, unexpected ways only he could have imagined. Though my health has been a frustrating stumbling block, as I might see it, God’s ways are higher, and I have much – so much – to be thankful for.

When I first wrote that blog post at the start of July, I had no real clue that by the end of August I would be getting paid to do writing and journalism again, and I had no real clue that some of the desires of my heart might actually begin to open up or at least give a wee glimpse of opportunity now on the horizon, where once it seemed simply a bolted closed door.

Without going into details, as I’ve said, I have been back writing again in a paid capacity, including the excitement and joy of being commissioned to write a well paid feature article for a USA magazine, with another straight off the back of that one, for a California-based magazine due for mid-September. I say this not for any other reason than to give glory to God, and share with you, reading this, to hopefully encourage you: that beauty can come alongside the beast you are going through. Dirt and dung of life can indeed be the springboard to your success or more positive times. Blue sky can once again appear after the grey. Light will always, eventually (no matter how long it feels) proceed after deep darkness. It doesn’t mean the dirt and rubbish won’t come again, but it does mean perseverance and endurance are worth it.

And next time you’re around the North Coast of Northern Ireland, don’t be afraid to stop by and say “hello” to ‘the beasts’ on White Park Bay: Not only will they warm your heart, but they’ll cause you to remember this blog post I hope.

Thanks for reading and thanks for stopping by over the summer months.

To be…or not to be… continued….