This article was published earlier this week as a page 3 exclusive for The Belfast Telegraph (UK regional newspaper and UK website of the year). 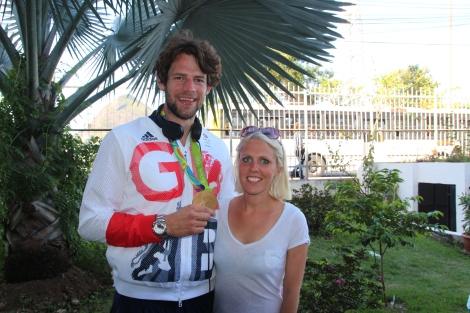 After four years of hard sweat and tenacious training every day since winning a bronze medal in London 2012, Tom helped play his part in securing another Great British gold victory.

It was the British men’s eight rowers’ first gold medal since the days of Sir Steve Redgrave in Sydney, 2000.

Veterinary surgeon, Karla – now working in Winchester – took time out to travel the trip of a lifetime, to Brazil to cheer on her boyfriend, along with the other rowers’ families and partners.

Speaking to The Belfast Telegraph she explained: “Tom is on camp 3-6 months of the year, every year. He had been away since the end of June until 10 days before the games. He had 4 days at home and then flew out on the 27th July. I flew out on the 6th (August). Tom flew direct and I did a trip via Madrid and São Paulo to make it as cheap as possible!”

“I believed that on their day they would be the best crew but they hadn’t won at any international regattas throughout the season. They won their heat with style on Monday and from then the anxiety was building.”

“There was a huge GB contingent next to the Irish fans in the stands and we all screamed together! I was with Tom’s family and the other families and partners. I couldn’t watch for some of it – the race is just over five minutes long but it feels like a lifetime!”

Britain, the world champions, led throughout the race and finished well clear of Germany, who took silver, and the Netherlands, who claimed bronze.

Speaking of how they first met, Karla explained: “We met at University while

“At University, I captained Caius boat club (my college club) and we needed a women’s coach for the summer. Someone suggested Tom so he came for a trial and got the job!

I qualified in 2011 and have been working full time as a vet since then.”

Karla, who now lives in Henley-on-Thames, admits, though, that life as a successful Olympic athlete’s girlfriend is far from easy: “It’s really tough. We both have busy lives and Tom’s away a lot. Communication can be tough on camp with limited wi-fi. Not to mention the countless missed weddings, birthdays and family events.”

The keen amateur runner explained Tom’s gruelling training and it’s effects, “Tom trains 20 out of 21 days starting at 7.30am and getting back at 4pm. His hands are constantly blistered. He’s often tired, hungry and stressed. Sometimes he’s too tired to walk the dog with me in the evening. The training puts his body under so much strain but being the best means being on the edge of injury and illness. I’m so proud and so happy for him (winning gold).”

Tom himself, added, “Crossing the finish line on Saturday was relief, joy, pride. It was a ‘dream come true.’ London was difficult – winning bronze felt like losing and it took a long time to be able to acknowledge the achievement.”

Asked on Sunday night if winning had sunk in yet, Tom poised, “Yes and no. It’s great to have got the job done, but I think it will take a while to really believe it.

“Rio is great – a really vibrant city and the organisation was top notch. There are so many supporters out here it feels like a home from home!
On whether Karla had helped have a winning effect on him, Tom said: “There’s a lot of laughter in our house which makes the time not training enjoyable. And it’s good to have someone to moan to when you’re exhausted.”
Tom explained how Coleraine rowers had helped him along the way:

“I’ve used the rowing machine at Bann Rowing Club while I’ve visited but I haven’t been out on the water yet. Hopefully that’s something I might be able to do in the future.”
Karla explained further, “I rowed at Bann in Coleraine while at school. It’s a fantastic and very successful club. I’m still in contact with one the girls I rowed with. Tom has used their rowing machine at Christmas when we’ve both been home.”

Tom added: “Karla has a great family and friends so it’s always a pleasure to visit Northern Ireland. I love the beaches, rugged coastline and the great food.
Karla explained that her family and friends from back home help keep his feet on firmly on the ground: “They keep him well grounded! My mum told him he wasn’t allowed home at Christmas unless he won gold! They’re looking after our dog this week while we’re away.”
When asked how does watching the rowers in the Rio regatta compare to cold dark mornings training in Coleraine, Karla quipped, “In essence it’s the same – it’s a tough sport even in the sunshine!”

So what next for Karla and her Olympic boyfriend Tom?

“For me, life goes on as a vet. We might go to the odd sports awards dinner but its back to work this week for me! For Tom it will mean he’s achieved his dream. As for his future as a rower, I think he’ll take some time out to decide.”

When asked would he ever think of bringing the gold medal to Northern Ireland one day, Tom enthused: “Definitely – hopefully when I’ve recovered we’ll be able to visit for the weekend.”