It’s been more than 48 hours now since the awful atrocity which occurred without warning at ‘Charlie Hebdo’ magazine offices in Central Paris on Wednesday.

I heard the news from a fellow journalist I was chatting with on Wednesday afternoon, here in Northern Ireland, having not had the lunch time news on as I normally do, nor visited the news app on my phone, as is so often ‘the norm’.

The snippets I heard made me immediately fear for my sister, who lives there in the French capital, and also wonder, ‘What has our world become?’

It was two more hours that evening before I had access to a television to view some of the scenes from Paris, and make up my own mind amidst the hyperbole, about what was going on.

When I rang my sister, who works in Central Paris, and lives not too far from where the whole massacre occurred on Wednesday, I was shocked to hear how shaken and evidently shocked she, and apparently the whole city, were and are. 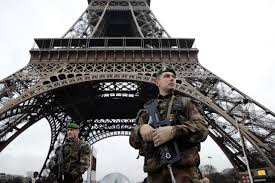 Now though, amidst shock turning to angry defiance, and unified resistance, the entire city is on high alert, still, as today’s event’s unfolded, and yet more death has resulted from the two hostage scenes which have occurred.

My sister and I have continued texting. She says to pray for the city, and for police intelligence to prevail. Amidst her mountains of exams papers to be marked. It reminds me of the distracted times of 9/11, when everyone has been captivated by the worldwide events, which everyone knows may well have consequences for us all.

It feels all rather surreal watching on Sky News or BBC news 24, which fuel the fear and uncertainty in the whole thing.

Whatever the lasting effect of the events ongoing of this week in Paris, for the security measures now set to be stepped up here in the UK and beyond, all of us have been made aware even more of the pain of terrorism and the fragile world we are currently living in.

My heart goes out to all the families of those killed this week, and I offer my sincerest condolences. I can only imagine how Paris and its people are on high alert with the fear induced by such a terror campaign unleashed upon it this week.

I have felt strangely connected to the events in Paris this week, despite being in stormy Northern Ireland, through the power of connection felt through my sister’s presence there.

One can only hope that further plots to kill are foiled. And it’s all a reminder of why terrorism and terrorists should never be tolerated nor courted, whether in Paris or Belfast.

One also wonders if the pain being experienced by Parisians currently, will lead some in France to think more soulfully of spiritual matters, rather than merely liberal atheistic views which offer little comfort in a time of collective pain.

Much debate has been stirred by the Paris events this week, and much more are no doubt going to continue. One can only hope that the UK can be guided towards foiling any and all so-called imminent threats to the public, as people’s heightened fear levels leave an anxious British Isles watching on.

Thank goodness for the Prince of peace and one who calms the storms.

One response to “Parisian pain”