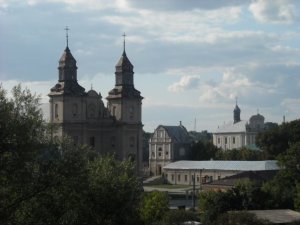 This exact week 13 years ago I travelled for the first time to a foreign destination outside of the British Isles, to the Eastern European country of Ukraine. The following is an excerpt from some reflections on this trip:

“Stifling heat, coupled with the stale smell of past passengers’ sweat did little to lure us onto the heavy metal post-war looking train in front of us, inviting us in. Yet soon with little choice in order to arrive at our Ukrainian destination, we reluctantly yet youthfully boarded the large train in Budapest train station and, together with 11 others, at the ripe old age of 17 years old, I travelled on my first ever Eastern European train journey. Something told me immediately it would not be my last.

At the beginning of our Friday evening departure, I was struck by the stark realisation that this train had no toilet, as such, it had merely a metal looking bowl-like structure, fitted with a metal pedal which opened the bowl out onto the bare ground beneath. My friends were quite aghast at it all, but I took it mostly in my stride, at least outwardly, reasoning that I had been brought up in the countryside. Besides, (I reasoned), I was in most other people’s heads a farmer’s daughter, so something within me resolved that this lack of toilet facility for the next 18 hours of my life was not going to do anything to dampen my spirits or spoil the great sense of adventure I had within my youthful self.

I had finally escaped the clutches of my parents, and home, for the first time properly in my life so far, and, despite having my own mild health problems apparent at that time, I was determined to make the most of my new-found freedom. As far as I was concerned, it was a God-given opportunity for Spirit-led excitement with friends in a foreign land. The opportunity would not be wasted on me.

The team we were all members of was part of a small Christian organisation in Northern Ireland, who’s mission statement at the time was to, “encourage and equip young people to become committed followers of Jesus Christ,” through the method of allowing them to be part of small teams, who would commit to meeting regularly for 6 months, once a week, for encouragement and team bonding , before heading off to an unusual place for a few weeks in the summer. It is apparent to me now, that such an amazing opportunity to go and grow by stepping out and going away on relatively inexpensive mission trips, offered an invaluable training and growing ground for me, not only in my spiritual journey, but perhaps more importantly as an entire person and young adult in my own right – having grown up in a large family with no previous opportunity for much travel.

So on the 5th August, 2000, I arrived eventually, following our gruelling overnight 18 hour epic, unforgettable train journey from the Hungarian capital, Budapest, in the eastern Ukrainian city of Ternopil. I was thousands of miles from home in County Antrim, Northern Ireland. Though I knew it cognitively, I felt strangely at peace here, in this place that was to be my home for my next 3 weeks.

I remember being shocked by this sense of feeling at home, despite it being the first ever time I had travelled beyond the British Isles, and so far away from my family. Yet no doubt because we were all part of a group of Northern Ireland young people (together with our American leader), and we all already knew each other, to some extent, beforehand, therefore it felt somewhat family-like to me right away. I was delighting in the very real sense of freedom and breaking away from control and bonds of home. My first taste of freedom was enough to spur me on to more in the subsequent years that would follow.

One of the first night’s we were in Ukraine, our team linked up with a number of translators who would work for us during the next two weeks. Sitting around waiting for our leaders to arrive at conclusions to the final finer details for arrangements regarding their work with us the next few weeks, I seem to recall getting into a fascinating conversation about language, dialect and accents, not least because of our own (to the Ukrainians’ mind, strange), manner of talking. “How now brown cow,” is the classic phrase often spoken out by Northern Ireland people when travelling and engaging in such conversations, highlighting the different ways we talk, and offering a self-deprecating laugh into the uniqueness of our accents and speech, unrivalled across the earth it would seem. (If you have never heard a Northern Ireland person talking, trust me, it’s worth a listen!)

During the course of the next three weeks, I encountered God in the good, bad and ugly of our trip to Ukraine, and not least in my times alone with him, as I continued to wrestle with some form of fatigue and illness I had picked up and battled with the previous year since my GCSE exams.

Our team participated in many activities and opportunities to live out the Christian faith we all professed, and I was thoroughly impacted by my times at the local orphanage and foster homes, where we were encouraged to simply spend time with the children there, otherwise abandoned and forgotten by society. The love we had to offer, we were told, may not be much for us or seem like much to give away, but it was more than these little ones may have received their entire lives so far. It was heart-breaking. Yet in the orphanage for the little ones, I found a feeling of ‘alive-ness’ in me that has perhaps yet to be found ever since, enjoying the privilege of simply getting to play with, and love, these precious little children.

At the beginning of our two weeks in Ternopil, the children were all extremely timid and shy, displaying marks of the psychological terror so evidently etched upon their tragically young, abuse-ridden lives. Yet by the end of our short 2 weeks there, the change in these children was stark, and so apparent. It was with deep tears of sadness we said our ‘farewells’ through the translators and hugged them goodbye before our final departure. I have often wondered about these little ones in recent times, who would be young teenagers now, and how they have developed since. My tiny offering of time and love a tiny drop in a vast vacuum. One wonders if much good was even done in these visits, but it was as much about changing us, changing ME, as it was about us helping them, as is so often the case in our endeavours to reach out and think we are going to help someone else. Quite often it is we who are the ones who are changed in that oxymoronic spiritual way, no stranger to the phrase Jesus himself spoke, that it is more blessed to give than to receive.

Another lasting, impacting thing about this trip to the country nick-named the, “bread-basket of Europe,” was the sense of the still small voice of what I believed to be God whispering to me to begin to engage in my first ever attempt at the age-old spiritual discipline of fasting. So for the three Mondays I was present in Ukraine, I fasted and used the time I would have otherwise been eating with my team, to pray instead and cry out to God for my family members, and country whom I loved and continue to love very dearly.

Ukraine had left its mark of me, and at the age of 17, I was filled with passion to know God more, and follow him and his Spirit wholeheartedly in the life he had ahead for me back home and beyond. This, as far as I was concerned, was to start right at home, in school, as I headed back to my final year of school, passionately and idealistically determined to change the world, starting with my own.”