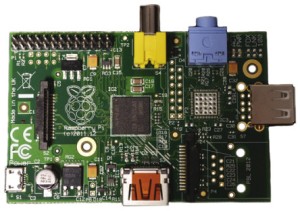 Once upon a time, asking for an apple, a blackberry or some pie containing raspberry would have meant a trip to the kitchen, pantry or ‘larder’ to find something fresh and edible.

Now, however, all of the above refer to gadgets, devices or a company more akin to something out of a 1960’s episode of Star Trek or 1970’s ‘Tomorrow’s World’ (for those old enough to remember) television programmes.

‘Apple’, of course, is the name relating to the now multi-million dollar California-based global leader in computer technology – coming back from the doldrums of the 1990’s to redress the balance and overtake its Seattle based rivals, ‘Microsoft’.

‘Blackberry’ is the (now rapidly sliding in popularity) mobile telephone company, and novel phone device famous for its tiny little buttons and sophisticated, once pioneering, ability to allow its users to check emails.

“Raspberry Pi”, however, for those of you reading this and yet to hear of it, is a new tiny credit card sized single board computer developed in the UK by the ‘Raspberry Pi Foundation’, with a view to teaching basic computer science in schools, and encouraging this amongst school pupils by the use of this extremely cheap little piece of hardware. Initial sales for these new Raspberry Pi devices began just last year, and slowly but surely, word is spreading, and schools are beginning to take on board awareness and curriculum. The only reason I have heard or known anything of it is because I happen to know a pioneering young teenager who enjoys informing me about it every time we see one another.

So what of the future? As many, including this writer, struggle to keep up with the pace and demands of ever-constant change in the technological realm, what implications does this have for the ongoing widening gap, for example, between the younger (generally ‘tech-savvie’) generation and the older generations? This issue is perhaps most especially pertinent to me in Northern Ireland, where I know many older people who have yet to even engage with the internet at all, let alone own an Apple device or hear of a Raspberry Pi. (Perhaps this seems hard to believe, for many of you reading on from other parts, such as England and the USA, but I can assure you, it is true!)

What does the ever-increasing growth of Apple devices mean, though, for older people, for example, and those who cannot afford such luxury middle-class devices?
Also, will ‘Blackberry’ ever recover the slice of the market it once enjoyed, and be able to continue to assert itself on the generation of users who quickly latched on to it, and even more quickly, it seems, ditched it for a better, more slick model? And will anyone really care? Is technology really so fickle that it’s a real case of ‘here today, gone tomorrow?’

What do we do in such a materially -influenced, technological era to scratch the hunger for spirituality amongst this younger generation in the British Isles, so familiar with these pieces of fruit, yet so unfamiliar with the fruit Jesus spoke of, for example, in John 15, verse 16+17: “You did not choose me, but I chose to you, to bear fruit, fruit that will last.”  Jesus was not talking about an everlasting Apple empire here folks! (Much as it seems many middle class Christians in NI wish he were, and I wonder where these values, and indeed even obsessions sometimes, have been allowed and encouraged to flourish?)

How do we hope to sincerely, ‘bear fruit’ of this kind, spoken of and endorsed by Jesus, in a world full of Apple objects, fading Blackberry devices and new Raspberry Pi pieces of kit, yet so often devoid of sincere disciples living out these true kingdom values and lifestyle endorsed by Jesus. Where are all the radical disciples, willing to look and be foolish according to this world’s ways, in order to set an example to those coming on after them? (I challenge myself on this).

Not that there is anything wrong with liking technology, per se. It is a fantastic tool, like any other, when used for the best intentions it was created for, and in balance with everything else.

Yet how does a younger generation of Apple, Blackberry and Raspberry Pi users in this world, however, get to know about the more laborious slower pace required for a sincerely seasoned, mature Christian disciple to be truly nurtured, grown and developed, like a sun-ripened item requiring all four seasons to flourish and blossom?

These are questions worth pondering, I suspect amongst many others, as the Christianity we know and have known in the modern era, continues to make way for the Post-Modern state and emphasis in society in this land, as it has already in London, California and other Western places driving forth culture.

With these, and many other questions left to be debated and drawn out, in the meantime I offer a feeble exhortation:
Older people: keep going. We need your kind, and if you’re reading this and feeling the potential for some kind of discouragement or even despair at the feeling of ‘out-of-touchness’ that a certain someone would like you to perhaps feel, then don’t. Your wisdom and wealth of life-experience is vital to the younger generations of Christians and young disciples coming up behind you. You don’t need to be literate in Apple or Raspberry Pi items to still be full of strength and purpose at this time, perhaps more than ever, as the speed of change in life continues ever more pertinently it seems.

Young people: respect your elders. It may not seem particularly cool, but it’s wise. Wisdom is better than cool, it’s classy and conducive to prosperity and success in all areas in the future. Your task is to, “get wisdom, though it cost all you have,” as a certain King Solomon once wrote.

The rest of us, well, keep enjoying your slice of the apple, blackberry and raspberry pi you own, but don’t do so at the expense of your soul. One day you might go into the kitchen and find little left in the larder for the rainy day when it comes along.